Ctrl + Alt + Del on the Mac: How to get to the macOS "Task Manager" 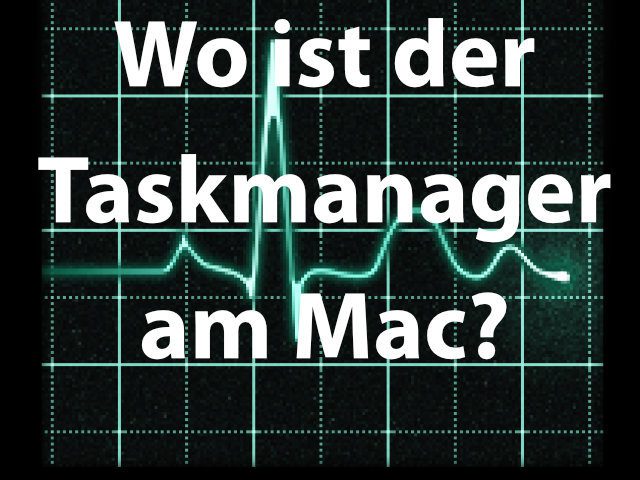 If you are looking for the task manager on the Apple Mac under macOS, which you can find under Microsoft Windows using the key combination Ctrl + Alt + Del (Control, Alt, Remove), then you will definitely fail. Surely a developer somewhere wrote an add-on for the operating system that allows you to use win shortcuts in this case. But that's not necessary, because in the operating system of MacBook, iMac and Co. you will find two options that can be seen as alternatives to the task manager: the program exit dialog and the so-called Activity indicator 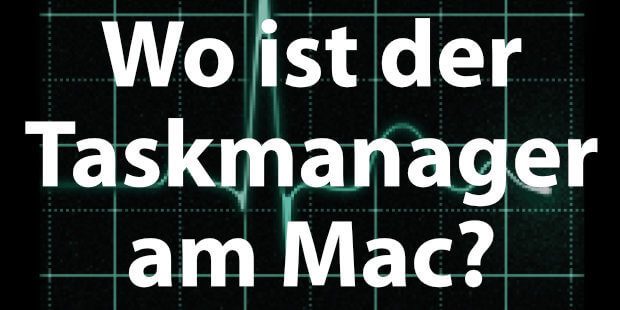 Ctrl + Alt + Del does not work on the Mac, but with CMD + ALT + ESC you get into a dialog to forcibly terminate programs. You will also find the activity display on the Apple computer, which offers you further information in addition to the possibility of closing programs!

The fastest way to forcefully (force-quit!) To end or shoot an unruly program is to use the "end programs immediately" dialog. You call this on the Mac with the key combination CMD+ALT+ESC (also Command + Option + Escape). 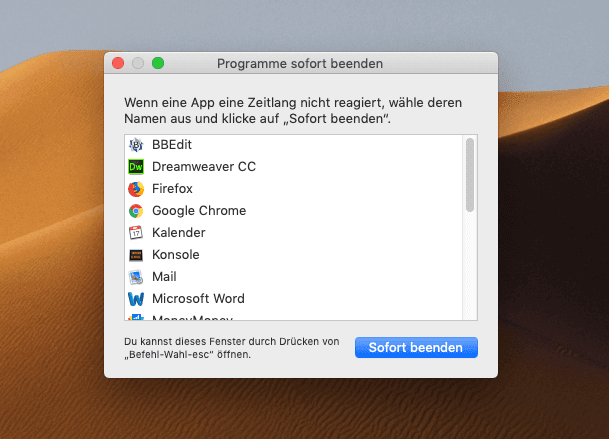 The dialog for closing programs immediately can be opened with the keyboard shortcut CMD + ALT + ESC.

All running programs are listed in the following window and the program name is usually also written after the program if a software program no longer responds. You can then mark the corresponding program and shoot it down with the "Quit immediately" button at the bottom right.

There is no task manager on the Apple Mac like you may know it from the Windows operating system. Under Mac OS X and macOS, however, you will find a similar overview of programs, processes and machine utilization – this is called the activity monitor. You can see the activity indicator in the Finder leads over Programme -> Utilities -> Activity indicator . call 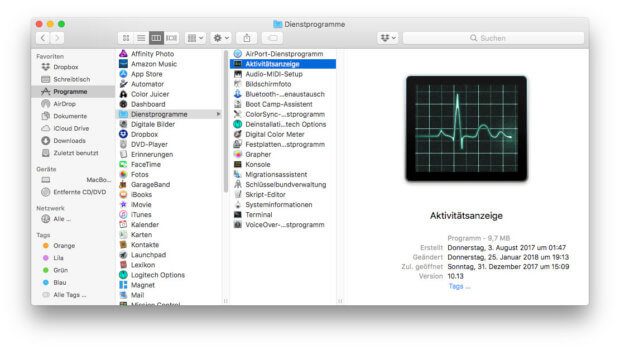 You can find the Apple Activity Monitor under Applications -> Utilities. (Click to enlarge)

Alternatively, you can also use the Spotlight search use to launch the utility. With the program, you then have the option of viewing information and values ​​for the following areas and components in separate tabs:

In the CPU tab you get an overview of the currently running processes and their contribution to the load on the main processor. In addition to the percentage of processor usage, there is also information on CPU time, threads, reactivations, etc. This tabular listing of processes on the Mac comes closest to the Win task manager. If you click on a line, you can perform various operations (end process, call up information, analyze, etc.)

The storage tab does not refer to the Disk Space. There is a separate tab for this. This is more about the main memory or RAM. Which processes and programs need the most RAM? Which app should you quit to get more memory for complex apps? You answer these questions in this area.

Here you are shown a relative value for the energy consumption by individual apps. Lower values ​​are better or gentler on the battery. You can find details on the interpretation of the individual information and numbers in the energy area this Apple Support Document.

Which program read and wrote how many bytes? What kind of app was it - 32-bit or 64-bit? And which user did the operation come from? You will find the right answer to these and other questions here. You will also notice conspicuous apps in the activity display of macOS that you may not be actively using, but that still read or write a lot.

In the network tab you can see which software has sent and received how many kB, MB or GB. Sent packets and received packets are also shown. In addition, there is also the PID value and information about the user. Streaming services such as Spotify, Amazon Music and the like as well as cloud services such as Dropbox or game platforms such as Steam have high values ​​for data exchange in the network - depending on usage behavior.

In the Windows Task Manager, which you can call up with Ctrl + Alt + Del, processes and programs can be "forcibly" terminated and their doing (or doing nothing) can be stopped. This is useful when they stop responding and / or slow down the computer. If this happens to you on the Mac, you can also terminate a program immediately. If the app is running normally, just right-click (or tap with two fingers) on the dock symbol and then on "Exit". If the app is crazy, you will find the option "Quit immediately" by right-clicking.

With the key combination CMD + ALT + ESC you can open the Finder dialog to close programs immediately. The result is the same as when using the program icon.

In the Apple Mac activity display you can proceed in the same way as in the task manager of the Microsoft operating system. To do this, simply click on a process and then on the button with the X, on the left above the list.

Do you still have a question or a hint for the efficient use of macOS on the Apple Mac, iMac or MacBook? Feel free to share your inquiries or tips and tricks in the comment area on this page. You are also welcome to write in there which problems you were able to / had to solve via the activity display.

Did you like the article and did the instructions on the blog help you? Then I would be happy if you the blog via a Steady Membership or at Patreon would support.

After graduating from high school, Johannes completed an apprenticeship as a business assistant specializing in foreign languages. But then he decided to research and write, which resulted in his independence. For several years he has been working for Sir Apfelot, among others. His articles include product introductions, news, manuals, video games, consoles, and more. He follows Apple keynotes live via stream.

DE
Mac broken? Have it repaired cheaply here![Advertisement] With the code SYRAP you get a 10 EUR discount on every repair at Sadaghian. Free shipping, check and preparation of a repair offer.

Amazon Affiliate ProgramAnyone who buys any article via this link on Amazon.de supports the Sir Apfelot blog with a small percentage of the (unchanged) purchase price.

Note: As an Amazon partner, I earn from qualified purchases.